Horses are incredible animals. They are intuitive, loving, intelligent, and spunky. A few years ago, we were able to witness a miracle performed right here on Cherokee Park Ranch that proved an example of just how compassionate horses truly are. The summer of May 2010, we were preparing ourselves for a fresh batch of colts to be born. One in particular decided to grace us with her presence a little earlier than we expected. It was a little filly named Helmet. Elise Prince walked over to the meadow, where all of the mares were kept, and noticed a maiden mare (first time foaling) named Dude that had clearly foaled already. But no foal to be found. She frantically searched the meadow until she found a little black speckled filly lying down, alive, but very weak. It is very unusual for a mare to leave her newborn baby all by itself and Elise immediately suspected something was amiss. She had a staff member halter Dude and proceeded to show Helmet to her mother in a very calm and gentle manner. With the whites of her eyes showing and ears pinned back, Dude began to spook at this little filly, kicking and pawing in her direction. She was rejecting her own baby. Elise decided to walk them to the corral and take more extreme measures to avoid hurting Helmet. They tried again to introduce Dude to Helmet but the results only worsened. Elise sedated Dude in desperation to let her baby nurse as she was getting much weaker. Even being sedated she kept trying to cause harm which lead to the use of hobbles on her as well. With those two tools, Helmet was finally able to safely nurse off of her terrified mother. For the next five days, Elise diligently went down, every two hours, and helped Helmet to nurse on her mom, who was showing no signs of getting use to the little filly. Eventually, it was clear that she was never going to accept Helmet so Dude was removed and Elise began bucket feeding Helmet. For the next twenty days she had to be fed every two hours, blanketed at night. It was exhausting and upsetting that it had come to that. One morning, as Elise was walking to the Mare meadow, she spotted our mustang mare Copenhagen, frantically pacing the fence and staring down the river in a panic. When Elise got closer to the distraught mare she saw she had foaled and the afterbirth and blood was directly next to the river. She sprinted to the nearest phone to call our neighbor, Niki, and together they thoroughly searched 2 miles down the cold, raging river. The baby had drowned to death. It was a tragedy, and yet something absolutely remarkable became of this. It was a long shot, but they had to try to take advantage of this new situation to benefit this poor mare and this orphan filly. They were going to attempt to graft Helmet to Copenhagen. Elise and Niki brought orphan Helmet to the mare’s meadow, into a temporary pen, and proceeded to place the afterbirth on top of her. Because she was already used to wearing a blanket at night, this step did not faze her in the slightest. The point of this was to disguise this filly as if she belonged to Copenhagen to make her believe she merely had misplaced her newborn, rather than lost it. They brought Copenhagen over to Helmet, put her in the pen, and realized that a disguise was never necessary; Copenhagen wanted Helmet as her own instantly. The only experience the little filly had with a grown horse was with her mom and that left a bitter taste in her mouth. She was frightened by Copenhagen. She trembled and clung to Elise, untrusting of what this mare was going to do to her and Copenhagen’s reaction was to stand perfectly still and gently knicker to her. Elise and Niki realized that they needed to give them some privacy and prove to Helmet that there was no need to be scared. They stood behind a nearby cabin and quietly watched. It took nearly 45 minutes for Helmet to get the courage to come near Copenhagen who continued to knicker with encouragement. In just 45 short minutes, Helmet gained her trust and began to nurse on her new mom. 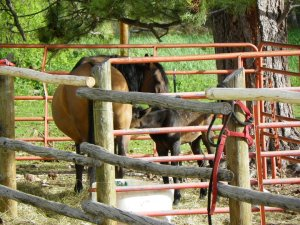 Elise and Niki cried, they couldn’t believe their eyes. It was incredibly moving that the two of them came together so quickly in this time of need. They were kept in the pen for about two days just to be sure they had made a lasting bond, although it was obvious they had. When they were released to be with the other mares in the field, they were a perfect pair, like nothing tragic ever happened. It was such a beautiful sight to look out at the pasture and see the two of them side by side, a buckskin mustang and a draft filly. Copenhagen is a very special horse to us on the ranch and if you ever get the pleasure of riding her, you will think so too. Her kindness and natural desire to take care of everyone around her, like she did with Helmet, is easily seen and felt. She is the mother to three now: Helmet, Pearl, and Ruby, all who remain right here with us. 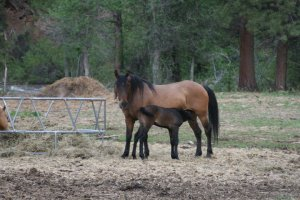 Helmet is one of the bravest and gentle colts we have ever had. When Townsend started training her he instantly fell in love with her willingness to learn and to please him. Helmet is now taking guests out on rides here at Cherokee Park Ranch! And that is the story of the miracle we witnessed of this unlikely pair: a buckskin mustang and a big black draft. 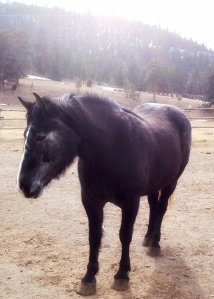 Book Your Next Vacation!